LIKITAN WAKA - ANYBODY CAN RAP 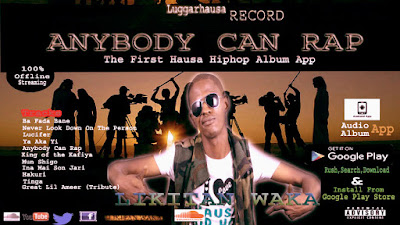 Luggar Hausa Records presents one of its very own LIKITAN WAKA. He drops his first studio album titled ANYBODY CAN RAP.

The album ANYBODY CAN RAP is a complete modern urban hip-hop album with a distinct taste of rich Hausa vocabularies in display. The content is beyond average and it is a real step ahead to see LIKITAN WAKA do some circumcision to some dope beats.

According to Likitan Waka, this album is so special as it contains exclusive songs that has never been heard before.

2 Never Look Down On The Person
3 Lucifer Ft Sulgee

The album is out as an app on Google Play for offline streaming of its content. Download below