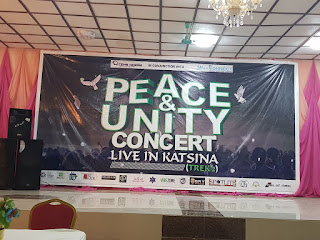 Making this known to Hausa Hiphop by the Project Lead, Abdulkadir Abdulrahman, he stated that the support was overwhelming and indeed Katsina State has lived up to it's expectation as the centre of hospitality.

The Katsina State Government who hosted the event through the Special Adviser to the State Governor on Special Duties, Hon. Tanimu Sada Sa'ad emphasized on the need for all concerned citizens to live in peace and unity. Hon. Sa'ad welcomed the contingents from Kano State who graced the State along with their host counterparts, to be good ambassadors of the country and try to deliver using their art as a means of uniting all Nigerians.
The event which was a 2-day event had a lecture organised for the performing artists and later a show to kick-start the event proper. There was a massive turn-out from the Katsina people who were ecstatic about the arrival of most of the artists who graced the event.

MC's of the event were Why Mallam and Kabir Bahaushe while DJ Master was the event's official DJ for the event.


There were a lot of highlights during the event as awardees were very emotional about the awards presented to them. Among the awardees, Alh. Surajo Mai Asharalle was all in tears after receiving the award and narrated that this was the first time in his entire music career that he was recognized with such a huge award in his home state.

Alh. Mai Asharalle was very happy to be a recipient of such award and thanked the organizers for identifying and recognizing with him. After receiving the award, the DJ, DJ Master slammed his old-school record from the legendary singer and everyone at the arena hit the stage to dance to his famous song.


The Special Adviser on Special Duties Hon. Tanimu Sada Sa'ad was awarded as a peace ambassador with closing performances from Eddy Kool and Mighty Swag Republic which marked the end of the event.

It was a night/day to remember as Katsina State stood out to be not only the pioneers of peace in the region, but also the Centre of Hospitality.
Published by HAUSA HIPHOP - December 07, 2017