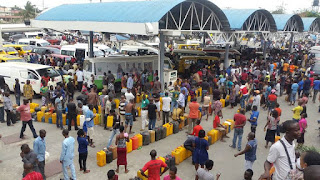 Speaking at the site of the mini depot, the Group Managing Director of the NNPC, Dr Maikanti Baru, said it was saddening to make such discoveries in the city center when less than 500 meters away, motorists were on endless queues.

The News Agency of Nigeria (NAN) reports that hundreds of jerry cans, 200-liter drums, and 500 liter tanks were uncovered in a sting operation by the team in the city center.
According to him, the perpetrators have caused untold pain and hardship on Nigerians during a crucial season as Christmas.
“In the war room (where crucial issues are discussed during fuel crises), we asked ourselves why the situation (fuel queues) persists.
“We got an intelligence report of these mini depots and as you can see, these golf cars that are supposed to have 40 litres have tanks that can take 200 liters of petrol.
“This other one is a mini depot. Although some of the products are diesel, the DPR says it is unauthorised. We have over 50 days supply of diesel and so there is no reason to hoard the product.’’
The Abuja Zonal Controller of DPR, Mr Mohammed Abba, told newsmen “we have arrested 20 people in connection with those who sell in jerry cans in Zone One alone and their facilities.
“We are handing them over to the Nigeria Security and Civil Defense Corps, because the DPR has no capabilities to prosecute.
“We will test for forensic analysis and we will pursue the case to court’’.
Mr Aminu Abdullahi, Assistant Commandant-General Operations, Nigeria Security and Civil Defense Corps while receiving the perpetrators confirmed receiving the 20 persons.
“We have received the suspects and DPR will be called in for forensic analysis to test what was handed over,’’ he said.
A survey of filling stations by the News Agency of Nigeria (NAN) in the FCT revealed that motorists are lamenting the harsh conditions on fuel queues on Christmas Day.
Some of the filling stations visited by NAN were the NIPCO along Jabi, Oando in Zone 1, Texaco on the Airport Road and NNPC Mega Station along Zone 1 and on the Kubwa Expressway.
NAN reports that though there was presence of security agents in almost all stations visited, the queues were rowdy with angry commuters screaming themselves down.
NAN also reports that at the NNPC mega station, the rowdiness was caused by two cars on an illegal queue that blocked the main queue and insisted on entry.
The presence of three security agencies comprising a military man, a policeman and a civil defense man did nothing to intimidate the driver who kept saying ”It is sad that I have to be at a filling station today.
“My family is at home waiting for me to come and take them out. This is unfair, sad and cruel. This is my worst Christmas’’.
At Jabi, NAN reports that the security men were dressed to the hilt with helmets as if ready for chaos but there were still very long illegal lines blocking the exit to NIPCO.
A motorist, Mr Salau Agidingbi, told NAN, “it is these illegal queues that cause chaos during crisis such as these. they block flow of oncoming traffic, block the exit for drivers that have got fuel after queuing up for hours and want to be served immediately they get into the station”.
At Texaco, a pump attendant, who did not wish to be named, told NAN “we close at seven before because of security issues but because of the people traveling we have to extend our time till 9 p.m. or 10 p.m.
Another motorist, Celia Tamuno told NAN “this Christmas is horrible. See me here. It is annoying and the lines are so long. Other mothers are at Wonderland, other fun places and I’m here. This is heart-breaking’’.(Culled from NAN)
Published by HAUSA HIPHOP - December 25, 2017