Popular Hausa Hip-hop rapper, Ricqy Ultra added up a year earlier to his new found age. The versatile and outspoken rap artist took his time to celebrate it in the studio.

When contacted by Hausa Hip-hop Web, the artist told our correspondent that he was quietly working underground to release a new project titled "Welcome To Zoo Road" which was supposed to have been released  earlier. But Ricqy Ultra pointed out that the artwork has been released as promised to calm his loyal fans.

According to him, he has a much bigger surprise for his fans as he will still release the mixtape project which shall be his fourth mixtape project in total, but along with a more special package.

When asked what the surprise is, he calmly said in hausa "Mahakurci, shi ne mawadaci" meaning "Be patient and keep calm".

Before then, here is the album track list below. 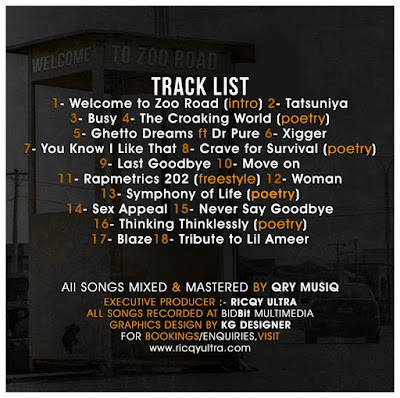 The track listing has a total different array of presentation as compared to the conventional type of album/mixtape listings. The inclusion of some poetry into this project is something quite new and a totally new invention. This shows the creativity of Ricqy Ultra as a totally different hip-hop head in this generation.

Let's await to see what the Welcome To Zoo Road Mixtape Vol. 4 project has for us all.