K-ARROWZ is known for speaking reality and this song BAIWA is another exclusive song dropped to confront the issue.

BAIWA is a native Hausa word which means "GIFTED" and this group expressed their mind in this conscious track which features highly rated and upcoming artist that resides in the heart of Kano City, Whimz C.


BAIWA is a song that will keep your mind unconscious for a while because the reality picture has been painted in words. People are well endowed with riches but they neither pay their tites nor give zakkat to the needy.

Their quest for greed brings nothing but poverty at the doorsteps of those who need their help. They only fend for themselves and thier family while neglecting their humanitarian service.

Another aspect addressed by the artist is the storyline on how hunger drove someone to steal a bread just to eat and quench his hunger.Unfortunately, he was caught and nearly mobbed until a police van full of cops came to the thiefs rescue.

When a police officer saw the situation of the petty thief, he bought him a soft drink and told him to eat the bread along with it. What he saw in the thief was nothing but hunger.

This song is so touching that you will feel the empathy running through your veins. Download and listen to K-Arrowz's new single titled BAIWA. 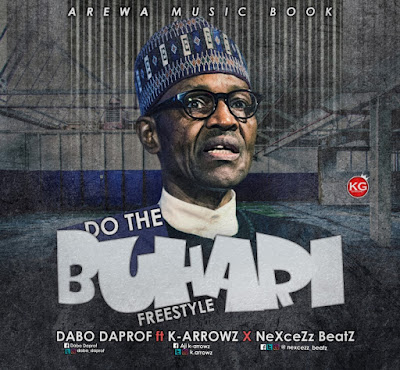 Without an introduction to the title,Muhammadu BUHARI is the name of the President of the Federal Republic of Nigeria.The song is all about encouraging Nigerians to be patient with the current situation the country is in and that better days are ahead.

Muhammadu BUHARI is presently out of the country for medical check-up and that has been creating a lot of rumours about the President's health status. Although, he is hale and hearty according to reports, this song is also to wish him speedy recovery and quickly take Nigerians back to the other room (i.e. room of progress).

Dabo Daprof was a nominee a the last AMMA Awards held in 2015, he is looking forward to dropping more hits after exclusively dropping LADA GOMA which created a lot of media trend during its last release in 2016.

BUHARI is a song that will help calm tensed nerves. The song features K-Arrowz and the trending producer at the moment, NExcezz Beatz. Be sure to control your ribs as you will crack a little bit of it. The song was produced, mixed and mastered by NexceZz Beatz himself.

Connect with Dabo Daprof via

Aliyu Gidado Abubakar who goes by the stage name KING BOB LEE is a Taraba-born artist based in Kano. King Bob Lee drops his first single titled "LOVE IS BLIND".

Prior to the release of this official single LOVE IS BLIND, King Bob Lee is an independent artist whose genres include Hip-hop, R&B and Afro-pop.

The artist first hit the studio professionally in 2003. He started as a vocalist in the defunct group UGs which was a group of four (4) artists as at then with two (2) vocalists. UGs released their first studio album titled "Peace and Unity" with their hit song titled MAMA earning some credit in the album.

King Bob Lee went solo in 2014. During his single spell as an indie artist, Bob Lee released BIG BOY, SEY LADIES, ZUNDUM DANCE and other singles. The release of these singles earned him two (2) multiple awards at the Jalingo City Award which was held in 2015 at Taraba State.

He won the awards under the categories " Best R&B artist" and "Best Unsigned Artist".
King Bob Lee has collaborated with acts like Mr Gee in the track "Balm Balm" and "Kumbiya Kumbiya" with Billy O.

"Love is blind" is a song that centers on the keyword "LOVE". According to the artist, love is all about give and take. It entails about him narrating what he feels about the girl of his dreams. Listen closely to the lyrics. The song has a catchy hook and it has a simple feel.

The song was produced by DJ Ay, mixed and mastered by COB J. Download below