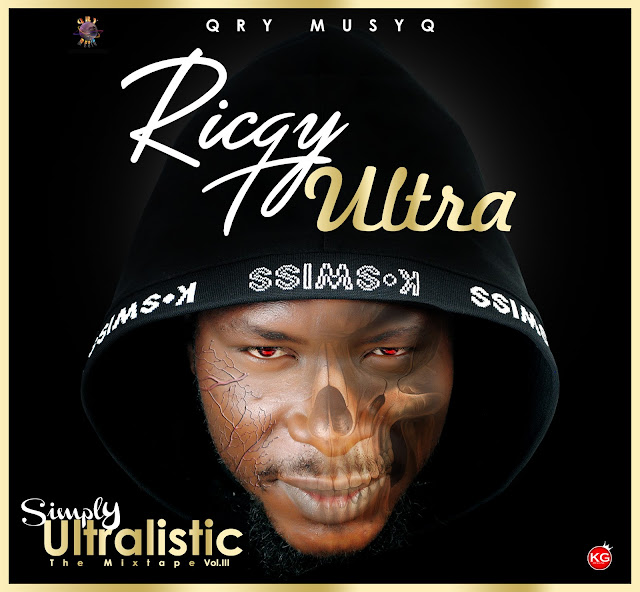 There is simply no doubt that RICQY ULTRA has been one of the most unswerving hip-hop heads in the music landscape particularly, HAUSA HIPHOP. He drops this startling mixtape he titles SIMPLY ULTRALISTIC.

This is the third (3rd) mixtape project from the artist within a single calendar year. He dropped HATE IT OR LOVE IT Vol. I and within the same week, unleashed the follow-up HATE IT OR LOVE IT Vol. II. His unquenchable desire to give his devoted fans what they need prompted him to drop a single titled NA FASO. He hinted on dropping his maiden album to be titled MAHAKURCI MAWADACI, but without prior notice, unleashed this 10-track mixtape album SIMPLY ULTRALISTIC.

Ricqy Ultra is known for his unique and precise way of delivering his lines o any hip-hop invented beat. He is an authoritarian when it comes to voicing out his mind most especially, on the microphone. He was one of the most featured artists in the Hausa hip-hop scene, particularly in Kano State, Nigeria. He has collaborated with almost every known artist both in the rap game and in the contemporary music circle. 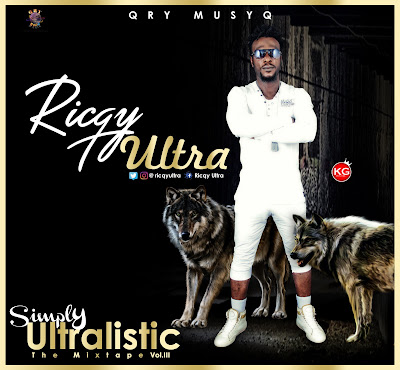 The second artwork shows the artist dressed in white. The color represents peace, illumination, faith, sterility, protection, possibility and tranquility within the artist’s mindset. The two wolves signify him being the alpha of the pack in the hip-hop game. Wolves are known to be very sociable, secretive, highly intelligent and most of all, territorial. All these attributes are related to why the album was termed SIMPLY ULTRALISTIC. 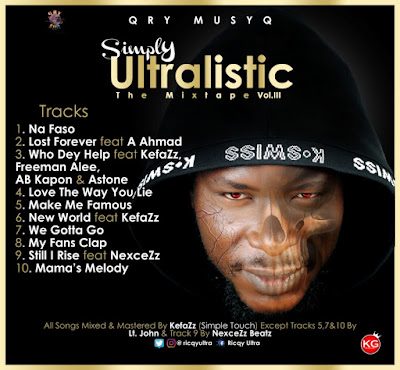 MIXTAPE WORK PREVIEW
The total duration of the mixtape is 43 minutes, 6 seconds.  The mixtape boasts of works from Lt. John, KefaZz (Simple Touch) and NexceZz Beatz. There is also a production credit from US based producer, Paul Cabbin. Simply Ultralistic [The Mixtape Vol.III] is a must have for any straight-thinking hip-hop stalwart.

With 10 songs available in this mixtape, the quality placed on the delivery, lyrical content, production, mixing, mastering and packaging is close to 100%.

The album comes with two different artworks which have different meanings portrayed.

By close examination, Ricqy Ultra can be visibly seen in a black-coloured hoody, spotting the designer logo by K-SWISS. His face reveals a fierce looking stare with a bloody-red pupil which signifies his passion for the rap game (also,symbolizing the pain he has faced in the hip-hop game). The eyes are the windows to the soul.

The veins across the right side of his face symbolises his thirst for lyrics which gives him that wild-look. The skeletal outlook on the left-side of his face reveals the mystical side of the artist that people can hardly see. It indicates the temporary nature of earthly life, in other words, everybody dies. The skull is the lasting legacy of human ingenuity. This can be told by the smiley look on his lips, telling you that none knows anything about him (just yet in the music scene). The black background signifies supremacy, seriousness,  passion, fury and mystery.

Published by HAUSA HIPHOP - December 20, 2016 No comments: Links to this post