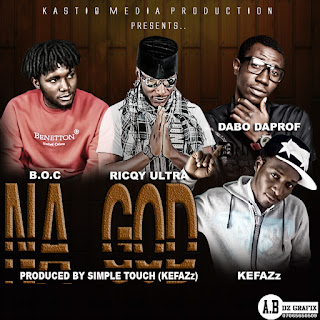 NA GOD is a song that will shift your attention towards the positive side of life. Four (4) emcees, four (4) lyrical bars seeking attention & four (4) products of Arewa breeds.

B.O.C Madaki is one of the most outstanding emcees currently making headline in Beehive (Bauchi State) and beyond. He has dropped a lot of singles lately and had so many collaborations with other emcees in the game. After dropping his NO ENGLISH Mixtape, B.O.C had the privelege of opening this song with his lyrical prowess.

KEFAZz a.k.a SIMPLE TOUCH is one of the best upcoming producers out of the Pyramid City of Kano. He has been cooking beats after beats and also a sound engineer. KefaZz is a gospel artist but guess what! He shows how multi-talented he is by dropping some punchlines in this song NA GOD. "Sam baza su gane ba...Na the blessings of God dey boku-boku". Well, the hausa hip-hop nation will definately believe that KefaZz is indeed blessed.

RICQY ULTRA a.k.a Mahakurci, Mawadaci is another Rap Prodigy in the making. Representing the Pyramid City of Kano, Ricqy Ultra is gradually becoming a household name in the mouth of hausa-hiphop lovers. His recent work with Saeed Nagudu titled RA'AYI NA has inspired a lot of music lovers. He is currently the most respected hip-hop act in Kano State of Nigeria. Nominated in the AMMA AWARDS 2015 for NEW AGE MUSIC AWARD, he is already raising the stakes higher in the hiphop industry.

In his verse, he said "Fans kulun tambaya suke ko akwai wani latest omo NA GOD....Ga kira da text, tweeting, pinging, liking ba adadi omo NA GOD.....". When interviewed, RICQY ULTRA said a lot of fans are just not tired of asking him for latest songs. As a matter of fact, he had to release a mixtape album titled HATE IT OR LOVE IT to appease his fans. Ricqy Ultra is currently working on his first debut album which is set to drop by APRIL 2016.

DABO DAPROF is a rising act and an upcoming comedian in the entertainment industry. He is well known in one of the singles he featured alongside AB KAPON & HAZY D'Star titled 3 KINGS. The song brought him into the limelight and he went as far as appearing in the music video BASU DA DAMA which had K-ARROWZ with RICQY ULTRA and AB KAPON.