NEWS: TAGWAYEN ASALI IN THE LIMELIGHT 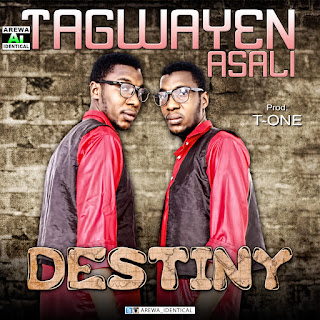 When you are asked who are the most successful group ever in Nigeria, the first thing that will come into your mind are the two-twin brothers, Peter and Paul Okoye (a.k.a P-Square). Interestingly, they are products of the North (Jos, Plateau State specifically).

There are equally two-twin brothers who are making the media go frenzy from the north down to the south. They are identical twin brothers. Identical brothers in the sense that what they wear, eat, how they smile, interact and live their life is/are almost identical.
They were born in Kano State, one studied English Education while the other studied Public Administration. They have won a lot of accolades. They have hosted a TV series program. They have shared the stage with top music arts. They are not relenting. They have met with a lot of bigwigs in the music industry.

They are non other than TAGWAYEN ASALI a.k.a AREWA IDENTICAL.

Hassan and Husseini are the rarest Hausa twin-duo in the music scene. They started singing professionally in 2003. After releasing their debut album titled "GYARA KAYAN KA", they switched from the Hausa Contemporary Music to the Hausa R&B/Pop Genre. They are currently pushing their work titled DESTINY which featured FINESSE ENTERTAINMENT's ClassiQ in the REMIX.

They were seen recently with P-Square. When asked if they have something going on with them, they replied YES. They are currently working on a single with the duo group and a video will be shot to compliment it too.


As a matter of fact, HAUSA HIPHOP BLOG caught up with the artists at DALA FM 88.5 (the Swag Station) were they were hosted by one of the radio's OAP and host of HAUSA HIPHOP, Bello Ibrahim (a.k.a BILLY O). They had an interview session with the group.


After the interview session, they had a photo session with the presenter alongside K City's Emcee RICQY ULTRA,the comedian DABO DAPROF and another Underground emcee (Now a pilot) NONSTOP GASHI.
We at Hausa HipHop Blog wish them all the best in their future endeavors. Stay tuned for an "EXCLUSIVE CHAT" with this amazing and talented artist in our next interview.
Published by HAUSA HIPHOP - November 19, 2015