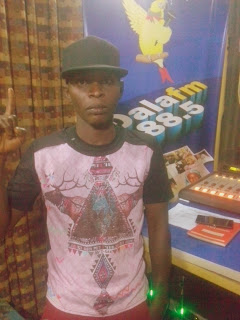 Kano City is now an official hub for so many artistes these days. Few months ago, Kano city was graced by the coming of artistes such as B-Meri, Vector, Wande Coal, Dija, Oritshe Femi, Joe El among others.
It's quite alarming how artistes these days are storming the ancient city of Kano.
After the visit of B.O.C last week, Lagos-based Producer, Sound Engineer, Vocalist and Emcee representing A.T.M IYALI,GALI LANDMAK (a.k.a Dodan Rap) hits Kano City. He came into the City while landing at Aminu Kano International Airport from Murtala Mohammed International Airport, Lagos. Our correspondent had a one-on-one chart with the ace producer.Upon his arrival,Hausa HipHop Blog asked what brought him down here. He replied vividly by saying "I came for a media tour".

In his own words, he talked about how he came into the music scene, his dream of being a footballer, his struggles in Germany, how ATM IYALI was formed, collaborations with top Lagos based artists like Modenine, Eedrees Abdulkareem, others, his latest singles, his dreams and aspirations and a lot.

Below are some images from his media tour in Kano city.

We at Hausa HipHop Blog are saying WELCOME TO K CITY......BARKA DA ZUWA....... ENJOY YOUR STAY.WE ALSO WISH YOU SAFE TRIP BACK TO LAGOS.
Published by HAUSA HIPHOP - November 13, 2015